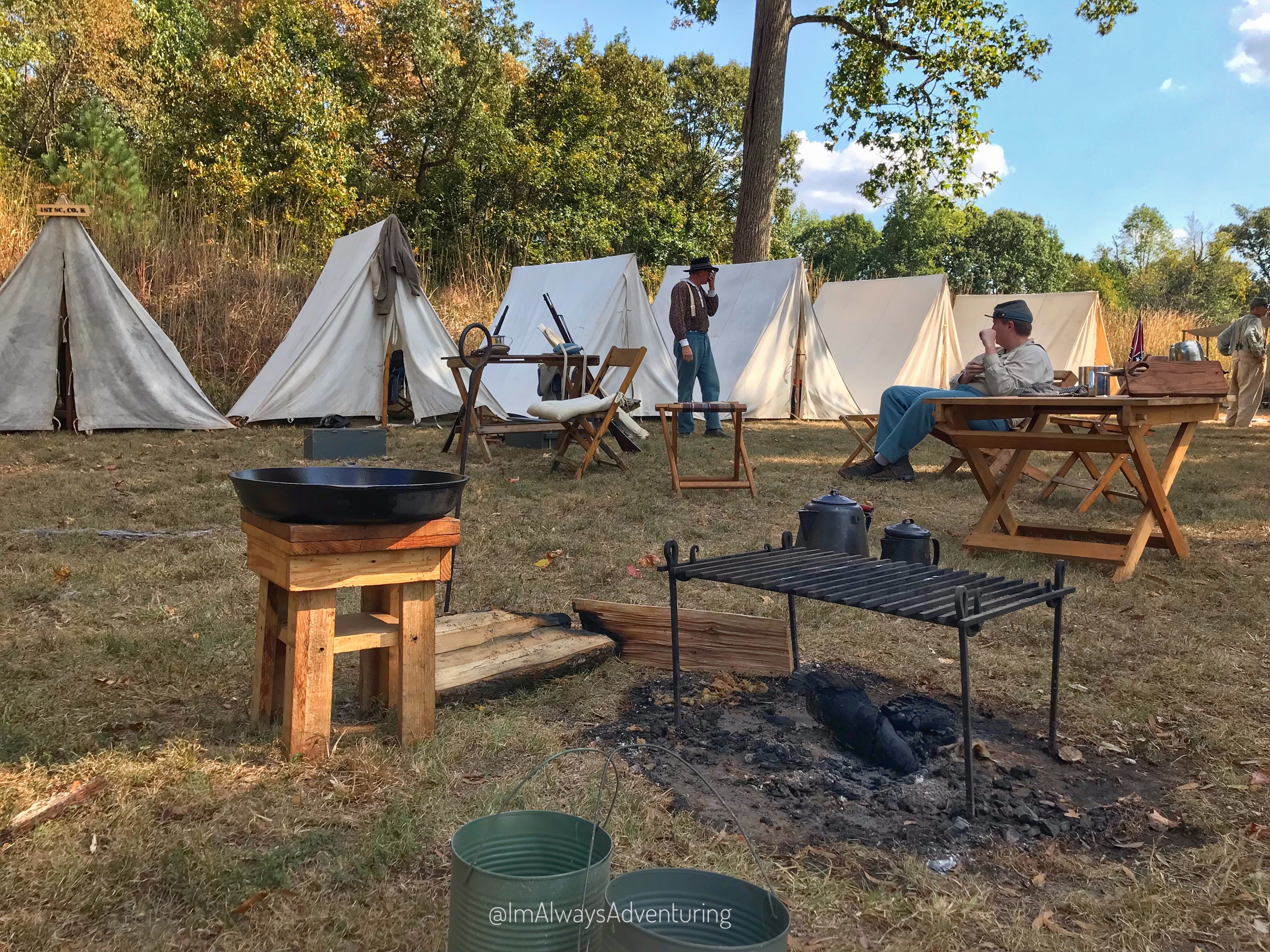 This past weekend, the Richmond National Battlefield Park Service hosted a Living History event at Fort Harrison. Fort Harrison? You mean Fort Burnham? No… Yes…. Wait….  Ok, let me explain… During the Civil War, Fort Harrison was a part of a series of fortifications that protected Chaffin’s Bluff; part of the larger defenses of Richmond, the Confederate capital.  Although Fort Harrison was strategically important, Confederate General Robert E. Lee had diverted his troops to Petersberg, which was under siege.  On September 29, 1864, Fort Harrison, manned with only 200 soldiers, was overrun by Union forces.  In the fighting, Union General Hiram Burnham was killed., and thus the fort was renamed in his honor.  The fort stayed in Union control for the duration of the war.

There were several attempts by the Confederacy to retake Fort Harrison, but the attacks were always repulsed.  The battle at Fort Harrison was just a small part of the siege of Petersberg and Richmond. Battles raged nearby for months, but ultimately the Civil War ended 7 months later.  There is quite a bit more history about Fort Harrison and it’s significance during the Civil War but this article isn’t about that.  This article is about the event from this past weekend and about the people that spend their time learning about history so that they can accurately portray it.

Soldiers Camp During the Civil War

A lot of articles that are written, or videos that get posted online are of the weapons demonstrations or of the re-created battle scenes.  Most people want to read about, or watch what they consider the “exciting stuff.” I talked about many of those same things in a previous article, but in this article I wanted to focus on something different; I wanted to take a look at the human element.  So, for this article I decided to focus on the soldiers camp.  Luckily for me, the soldiers from Company K, 1st South Carolina Infantry,  were more than willing to answer my seemingly endless questions.

Troy, the Commanding Officer of Company K, 1st South Carolina Infantry was my first victim…. I mean…. the first person that I was able to ask questions of.  Troy talked about the types of food that a typical soldier during the Civil War would have to eat.  There was a small display of different types of beans and vegetables, as well as hardtack.  Now, unless you have studied the Civil War, or are regularly going out into survivalist-type environments, you probably don’t know what hardtack is. I sure as heck did not.  It was extremely common during the Civil War because it was very cheap to make, consisting of flour, water, and sometimes salt; and it lasted foreverrrrrrr.  The downside was that it was as hard as a rock.

After learning about a soldiers diet, I decided to switch gears and learn about their weapons.  A gentleman by the name of Steve had several of his rifles on display.  I have a semi-decent grasp about the different weaponry that was used during the war, but I always enjoy listening to people speak about it.  What I enjoy isn’t necessarily the specific details, it’s about the passion in which they talk about it.  Steve proceeded to tell me the history of the weapons that were on display; where they were created, and the year they were created.  He told me that based on the history of the weapons, it was very likely that the rifles were actually used in the battles that occurred at Fort Harrison or in nearby Richmond.  I don’t know about you but I think that’s pretty darn cool.

One of the really interesting things that I learned was that the factory machinery in Harpers Ferry, West Virginia, was dismantled and brought to Richmond in order to make weapons for the Confederacy.  Until that point, the United States Armory in Harpers Ferry had produced more than 600,000 weapons over 60 years.  Although I have a pretty decent knowledge about how weaponry operates, the history behind the different models is something that I’m not too familiar with.  So, learning about the origins of the weapons was pretty awesome.  What struck me was how engaging Steve was; at no time did I feel like pulling my ears off or walking away from him, which has definitely happened at other events.  I did feel like a slight weirdo trying to get photos and video footage while he was talking, thankfully he didn’t seem to mind.

As I was taking photos and videos of the camp, I noticed a small box sitting near one of the tents.  Something about the box was very interesting to me, so I took several photos of it.  A gentleman by the name of Pedro came over and opened the box.  Inside the box was a simple wooden cross, a bible, and other small items.  I was so enraptured by this seemingly simple box that I forgot to take pictures of it while it was open.  Luckily, I did get a quick shot of the cross for the video that I created from this Civil War event.  Pedro, the Chaplain for the unit, told me about the small service they had that morning.  The theme of the service was friendship.  He went on to say that sometimes friendship was just about being there, being present for your friends.  I know from experience sometimes that’s all that’s needed.

In California schools there isn’t a tremendous amount of focus on the Civil War.  We learned about the basics: the major battles, Gettysburg, Antietam, Bull Run, and Appomattox; the states that were involved; and a small sliver of the politics.  But that was it.  We never delved deep, and there surely wasn’t any Living History events that I can recall.  California history is centered on Native American history, Spanish colonialism, the Missions, and Catholicism.  So, I’ve tried to attend as many events as possible since I’ve been on the east coast.  Unfortunately some of the experiences haven’t been that great.  In another article I discussed some of the differences between mainstream Civil War re-enactments and NPS events.  Even though this event was smaller than some of the others that I’ve attended, the interaction with the Rangers and the soldiers was fantastic.

One of the things that I love about visiting all of these different places is that I learn so much.  It’s a happy byproduct of putting together a cohesive article.  I don’t like to just throw a bunch of pictures in an article and call it a day, I enjoy doing the research so that I can share that with the readers.  While researching the history for this event, I was able to gain a deeper understanding of the Civil War and the unique aspects of these battles that made them extremely important to the timeline of the war.

As I said earlier, there is so much more information about Fort Harrison and this period of American history.  There is no way that this article would be able to do it accurate justice, and that wasn’t my intent.  My intent was to give you a small peek into what a typical soldiers camp would have looked like during this period of the Civil War.  Hopefully I was able to paint you an accurate picture, and if not, the video I created might be able to fill in a little bit more.

As always, thank you so much for following along on my adventures.  If you aren’t already following me on YouTube, please be sure to get over there and follow so that you can see the latest videos!  Be sure to subscribe to the channel!

I absolutely love reading your comments here, and on Facebook, and Instagram, so please keep it up!

Until the next Adventure!