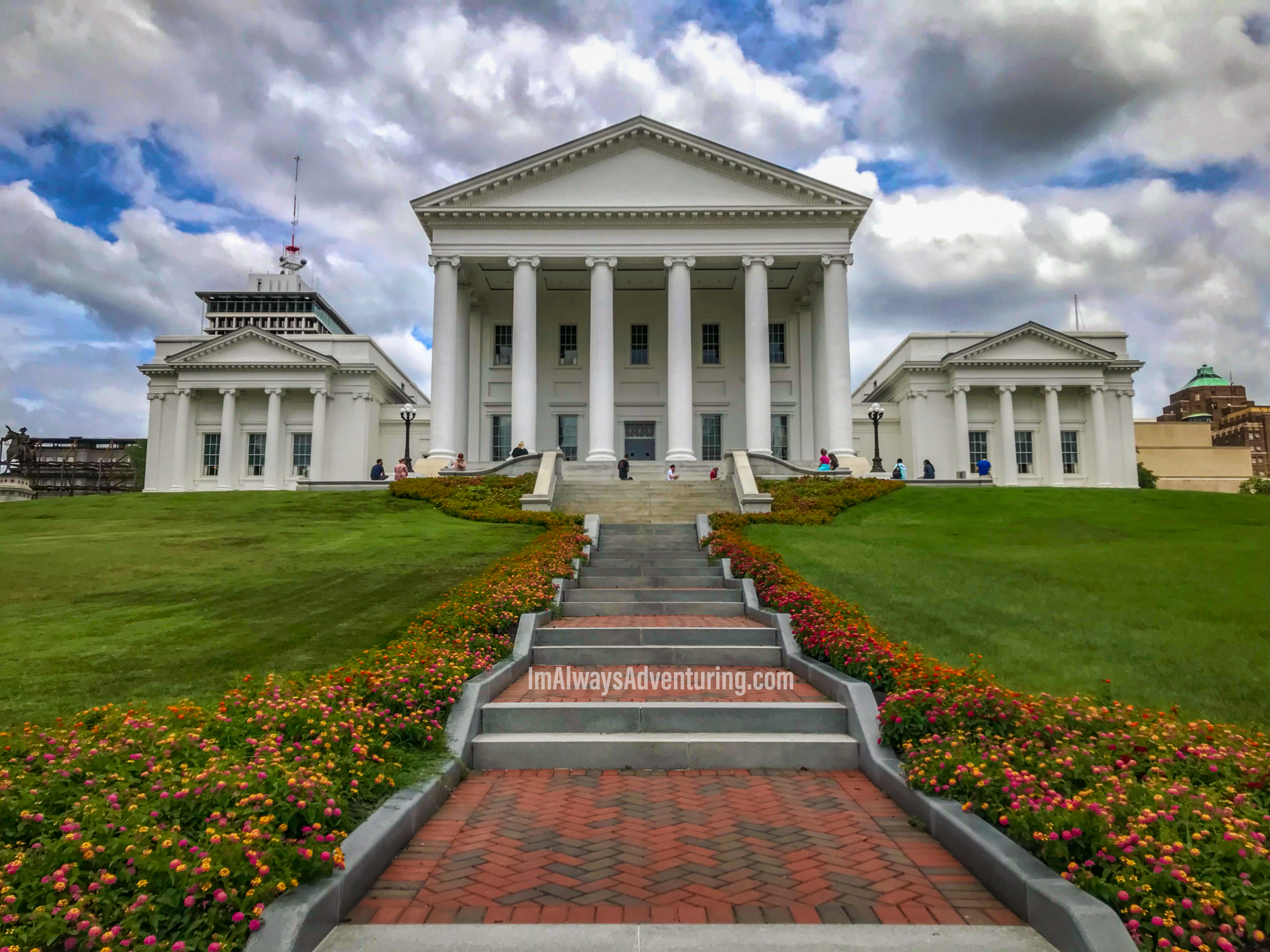 One of the difficult things about adventuring, is that sometimes it costs money.  Well, this article is going to cover some free things to do in Richmond, VA. The only cost, is time.  You will probably be able to see several of these things in one day, but I encourage you to take your time and really explore.  There is so much to see at each location.  The following 5 things are only a small snippet of amazing things to see and do for FREE in Richmond, VA.  I highly encourage you to get out and explore all of the things that Richmond has to offer.  You may find something that is not on this list.

Richmond is one of the many beautiful cities in the state of Virginia; becoming the capital of the colony and Dominion of Virginia in 1780.  Richmond has been an integral part of American history; Patrick Henry’s famous “Give me liberty or give me death” speech was given at St. John’s church (which still stands).  Richmond was also the Confederate Capital during the Civil War, and thus saw a tremendous amount of destruction, but also rebuilding.

Richmond has done a wonderful job of preserving its history while still being innovative and progressive.   Many of the historical buildings have been turned into hip eateries, or art spaces for creative expression.  It is really a wonderful city to explore and see the past and present meld together.  15 of the districts are listed on the Virginia Landmarks Register and the National Register of Historic Places (NHRP); with 30 additional buildings listed on the NRHP.

I know what you’re thinking…. A cemetery?! Whaaaat? Hear me out… It’s awesome!  Yes, it is a fully functioning cemetery BUT it was created to be a garden cemetery, not the typical flat-grid-like cemetery.  So, yes, there are graves and tombs and such; but there are also beautiful flowers, and trees, and winding paths overlooking the river.  Hollywood cemetery is the final resting place of 3 Presidents: 2 United States Presidents, James Monroe and John Tyler; and the only Confederate States President, Jefferson Davis.  It is also the final resting place for numerous activists, artists, Generals, academics, Governors, and more.  Oh yeah, there’s also a vampire… but more on that later….

Some of the monuments and the crypts are absolute works of art.  James Monroe’s crypt reminds me of a mini cathedral.  I explored his area for quite a while; I was awestruck at how beautiful and peaceful it was.  The trees offered the perfect amount of shade, while simultaneously adding to the beauty of the of the area.  The Tyler monument has the typical Presidential flair.  An Eagle with it’s wings outstretched, wrapped around a vase, atop a tall obelisk.

Near President’s Circle, where Monroe and Tyler are at rest, there is a winding path that overlooks the James River.  There are several seating areas along the way to sit and enjoy the peace and the view.  Further down the path, there is a more recent addition to the cemetery.  Built in 1992, the Palmer Chapel sits overlooking the river.  The chapel has stained glass windows and wrought iron work chandeliers.  It’s definitely one of my favorite spots in the cemetery to visit.  Hollywood Cemetery is open year round and they host walking tours, and other events.  Be sure to check out their website for more information.

Built in 1955, the Virginia War Memorial honors all of Virginians who demonstrated a willingness to sacrifice and defend the United States.  Initially built to honor those from World War II and the Korean War, it has been expanded to recognize those that were killed in action in the several major conflicts that the United States has been a part of.  There are nearly 12,000 names listed on the walls.  The memorial complex contains the outdoor memorial, a museum, an amphitheater, and event spaces.  The museum offers many different exhibits from every major conflict.  There are letters, items, uniforms, and so much more to see and explore.

In 1886, James and Sallie Dooley purchased the property that would later become Maymont.  The 100-acre property contains a Gilded-Age mansion, formal gardens, children’s farm, nature exhibit, and more.  The formal gardens are absolutely free to walk around and enjoy.  There is a small fee to tour the mansion, but I think it’s definitely worth it.  There are several small, or “specialty” gardens on the property, but the 2 formal gardens are the Italian and the Japanese gardens.

The Italian garden is absolutely breathtaking, it’s easy to see why so many couples choose it for their wedding ceremony.  I have visited several times, so I’ve been able to explore the gardens with and without a wedding present.  There is a beautiful pergola that runs the length of the upper garden; there is a similar one at Swannanoa, the Dooley’s summer residence.  The Japanese garden is a sharp contrast to the grandness and color of the Italian gardens.  Flowers are sparse; there is more focus on the natural landscape and the serenity of the area.  There are several places to sit and reflect, or just enjoy the area.  The shade is plentiful as well; a welcome reprieve from the summer heat.

One of the few buildings to survive the burning of Richmond in 1865, Tredegar Ironworks is home to the visitor center for Richmond National Battlefield Park office as well as the Civil War visitor center.  Inside the building there are displays, videos, and memorabilia about the Civil War.  If you love old architecture, then the building itself is really neat to explore.  Outside of the main building there are large pieces of machinery that were used at Tredegar.

The Capitol building in Richmond was designed by Thomas Jefferson, and houses the oldest elected legislative body in North America.  In use since 1788, the Capitol building has seen its fair share of destruction and growth.  The left and right wings were added in 1906 and an underground tunnel was added in 2007.  Initially the building sat alone amidst weeds and overgrown footpaths, but in 1816, Maxmilian Godefroy was hired to lay out a formal park.  Within the park there are several fountains, statues, and monuments.  The statues and monuments throughout the square honor different contributions to American history.  There is a monument to the Civil Rights movement, to Edgar Allen Poe, and many more.  Also located within the square is the Governor’s mansion.  It is the oldest residence still in use.

As always, thank you so much for following along on my adventures.  Hopefully this article gave you some good ideas to get out and explore.  Like I said before, these things don’t cost anything but time, so there’s no reason why you shouldn’t get out and visit one or all of them!

If you aren’t already following me on YouTube, please be sure to get over there and follow so that you can see the latest videos!  I absolutely love reading your comments here, and on Facebook, and Instagram, so please keep it up!