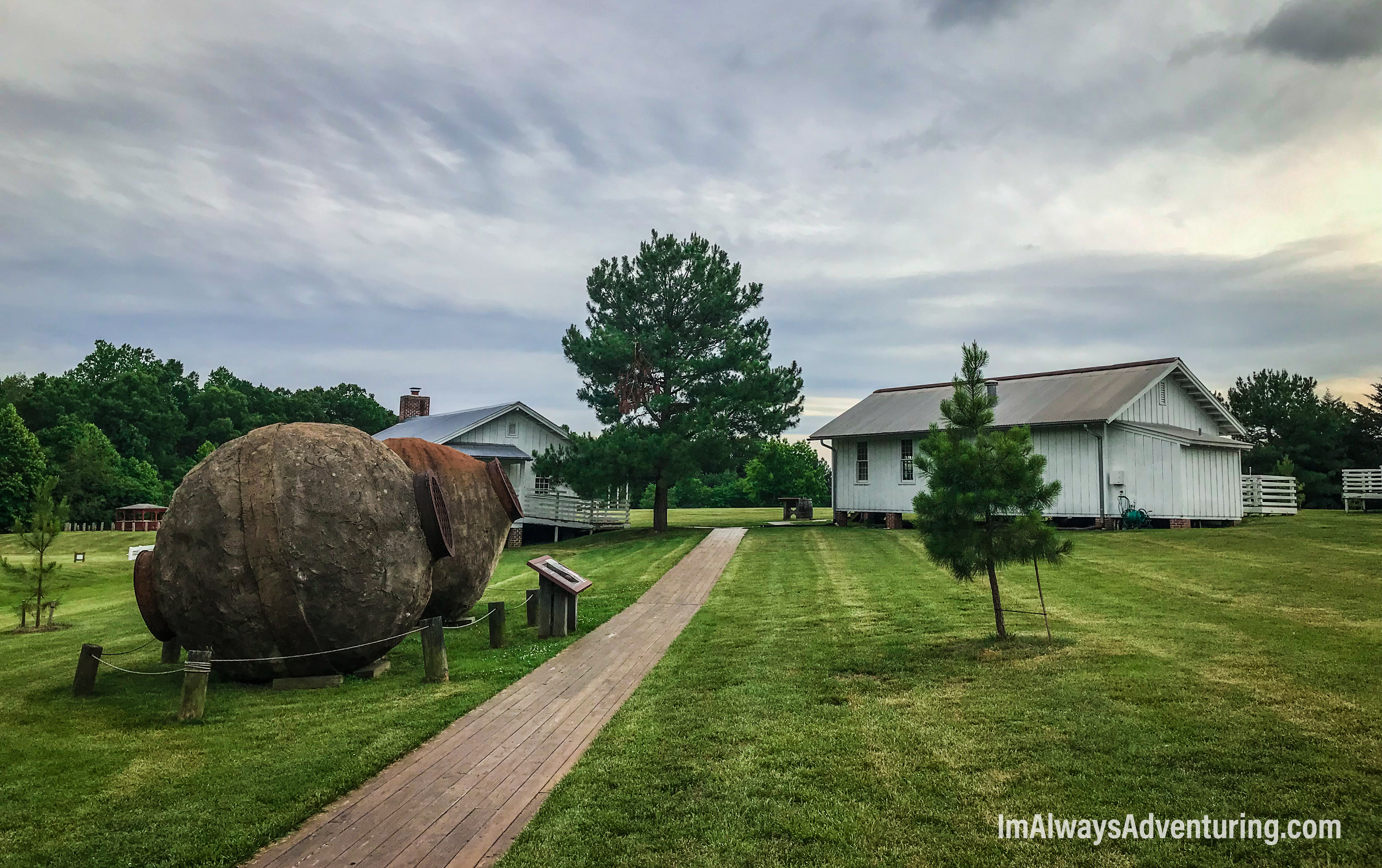 Until recently, I always believed that California was the end all be all in gold production for the United States.  I never imagined that there would be gold in Virginia.  In school, history class was ripe with information about the Gold Rush and the 49ers.  History class conveniently left out the atrocities that were committed on the Native population as a result of the Gold Rush, but that’s another article for another time.  Gold is one of those things that you don’t really think too much about.  Most of us only associate it with the jewelry we wear, not really thinking about where it originated.

I can honestly say that I was one of those people.  I never gave it a second thought.  It wasn’t until I was driving to an event that I noticed a sign for the Mining Museum.  Since I was on a time limit, I made a note to look at it on my return trip.  On the way back I noticed several buildings and what appeared to be huge concrete balls that could fit several standing human beings inside.  Of course this piqued my interest so I made sure to add it to my Adventuring list.

The earliest recorded mining activity in Virginia began in 1804; however, written references about gold in Virginia happened as early 1782.  Thomas Jefferson wrote of gold found on the North side of the Rappahanock River in his Notes on the State of Virginia.  At its peak, Virginia was the third largest gold producing state.  Gold mining continued uninterrupted until the California gold rush began in 1848.  A large portion on the serious miners moved west and shortly thereafter, the Civil War caused production to cease entirely.

Few mines survived the Civil War, with many of them being destroyed or thoroughly damaged.  A handful of mines were able to continue operations until World War II, when the Production Board directed the labor force to support the war effort.  Commercial gold production in Virginia ceased in 1948.  Mining never returned to the levels that it once achieved.  Due to the economy, the labor force, or a myriad of other reasons; it was never the same.

The Gold Mining Camp Museum at Monroe Park in the aptly named, Goldvein, is the only museum in the state of Virginia that is devoted entirely to its gold mining history.  The gold mining museum is not the site of actual mine, but 19 sites existed within 5 miles of the park.  When I was finally able to return to the park, I was pleasantly surprised at how well though out the entire park was.  Adjacent to the mining museum buildings is a family park with baseball fields.  It struck me as a really awesome place to bring your kids.  Fun and learning in the same place.  The day that I visited, it was late in the afternoon, and there was only one other couple there.  I pretty much had the place to myself.

The museum is laid out the same way that a typical mining camp would have been laid out at the turn of the 20th century.  The three buildings are recreations, but historically accurate.  The Assay Office, which also would have served as the business office, had different items on display that explained the business side of the process.  There were also minerals and various tools on display.  The bunk house had living quarters set up with different personal touches everyone.  It really gave me the feeling that miners were going to walk in any moment after a long day’s work.  There was even contemporary music playing to set the mood.  The third building was the mess hall, which had tables set up with various food items.  There was even a pot belly stove (or a very good recreation).

Throughout the park there was signage that explained what was on display.  A lot of it is self-explanatory, but it’s always nice to have it, just in case.  I’m sure there are plenty of kids that have no idea what a typewriter or an old wall-mounted phone are.  I really felt like I had stepped back in time; I felt like I was visiting my grandmother.  Not that she had mining tools lying around the house, but the old radio and some of the other items made me think of her.

Just outside the building area, there were 2 huuuuuge concrete balls.  At first glance they look like they were some type of weird jail cell.  Upon closer inspection, they are actually Hornet Balls, which were found at a nearby mine.  These Hornet Balls were used to crush ore and free the gold.  The gigantic balls weighed in at a whopping 7 tons, which is roughly the same as a full grown elephant!  That’s pretty darn heavy!

Just down the way from the Hornet Balls was hands-on exhibit that would allow you to pan for gold.  Unfortunately the times are limited and I happened to visit at an off-time.  If you’re interested, check out their website for the details.

Final Thoughts about Gold in Virginia

I took so many photos of this place, there was not enough room to fit them all in here.  If you want to see more photos, please be sure to follow me on Instagram.  I am currently working on a video as well, which will be up on my YouTube channel soon.  Places like this, that show the history that you otherwise wouldn’t know about, are so extremely important.  Like I said before, I had no idea about gold in Virginia.  I had always assumed California was the only state that it was found in large quantities.  Be sure to get out and explore!  Visit your local sites, your local museums.  Without your patronage, they will disappear.

Well, as always thank you for reading about my crazy adventures!  Be sure to leave your comments, I love reading your feedback!