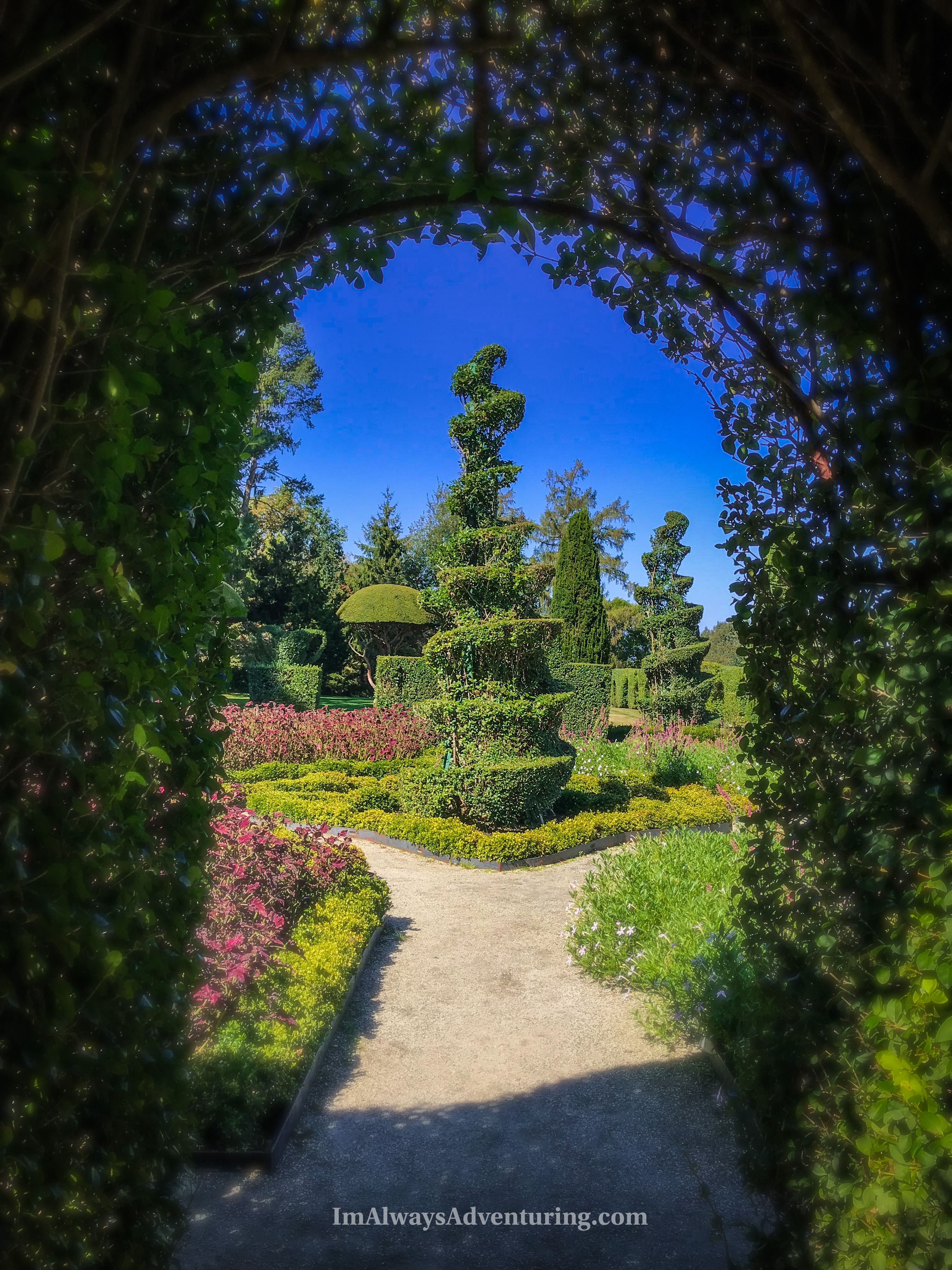 The name can be a little confusing if you’ve never been to a topiary garden, or if you have no idea what a topiary garden even is.  Are there going to be animals there? Are they green? Is it some sort of strange zoo?  So, the answer to that is yes…. sort of.  There are definitely animals there, and they are living and breathing, but they aren’t the type of animals that you think.  In this article we will explore the living, breathing, Green Animals Topiary Garden and the history behind it.

On a recent trip to Newport, Rhode Island, I wanted to explore something besides the Gilded Age Mansions.  Although the mansions are amazing, I wanted to venture away from the typical touristy path.  After a quick search of the area I came across the Green Animals Topiary Garden in Portsmouth.  If you have ever been to Rhode Island you know that everything is pretty close together, so I was able to find my way to the Green Animals Topiary Garden pretty easily.

The estate was purchase by Thomas E. Brayton in 1872, but it wasn’t until 1905 that Joseph Carreiro, Gardener and superintendent of the property, slowly transformed it into a living sculpture museum.  The estate originally consisted of 7 acres of land, a white clapboard residence, a pasture, a vegetable garden, and farm outbuildings.  Carreiro was recruited to design and maintain ornamental and edible gardens as part of a self-sufficient estate.  The first topiaries were started in the greenhouse in 1912 and later moved.  In 1938, George Mendonca was hired to make repairs in the gardens after a hurricane damaged them.  Mendonca stayed on and assisted Carreiro, and together they were both responsible for creating and maintaining the topiaries.

Dignitaries and the Future

When Thomas Brayton died in 1939, his daughter Alice took up permanent residence the following year.  Under her direction, a menagerie of over 30 topiaries were created.  Each topiary was trained using traditional techniques, unlike today; most modern topiaries use a metal frame to shorten the transformation time.  Over the years Green Animals became a horticultural destination and hosted many dignitaries.  During the 1947-48 season, the Green Animals estate hosted the coming out party for Jackie Bouvier. If that name sounds familiar, that’s because she would go on to marry President John F. Kennedy.  Another awesome tidbit: the Kennedy’s were married in a church in nearby Newport.  Upon Alice’s death in 1972, Green Animals was left to the Preservation Society of Newport.  George Mendonca remained the grounds manager until his retirement in 1985.

Green Animals Estate sits towards the end of a beautiful tree-lined road, so the drive itself was a treat! As we arrived, the first thing I noticed was the water.  The estate sits overlooking the Narragansett River, and the view is amazing!  It is very easy to see why Thomas Brayton chose that spot.  Everything is clearly marked, so it was easy to find our way to the admission area.  The woman that greeted us was fantastic, I wish that I would have been able to get her name.  She gave us several different knowledge nuggets about the estate.  There were two different options to tour the estate: one option was a guided tour of the Brayton house, which also included entrance to the gardens; or there was just the entrance to the gardens.  Since we were under a bit of a time constraint we opted for just the gardens.

Ok… let me backtrack for a second… the option to tour the gardens is an amazing option.  The Green Animals Topiary Garden is really the ice cream sundae and touring the house is the cherry on top.  So, now that we got that out of the way… on to the Gardens… As you walk into the gardens, it is a little difficult to see the expanse of it because the topiaries are quite large.  As you turn each corner, you are greeted with more and more different forms and animals.  At the admission counter we were given a map that detailed where each animal was located, as well as various areas of interest. I made it a game of sorts to find all of the animals on the list.  It was my personal Easter egg hunt.

Although the name of the estate is Green Animals, there is so much more to it than that.  Throughout the gardens there are fountains, flowers, vegetables, and more.  I spent so much time standing in one spot trying to take it all in.  I didn’t want to move because I wanted to see every detail.  Everything was manicured so perfectly and beautifully, it made my little OCD heart so happy.  Every time that I thought I saw everything from that spot, I saw something new so I stood there a little longer.

In an effort to see everything, I worked my way around the outside of the gardens, hugging the outer perimeter.  I found myself walking through beautifully sculpted doorways of greenery, into flower gardens, and vegetable gardens.  There were several areas with various flowers and veggies, it seemed like there was at least one of every type of flower in existence!  But, unfortunately, I didn’t stay in those areas too long.  There were several people trying to get their shots for the Gram with the large flowers, and there was plenty more garden to explore.

As I wandered about, I came across countless, thoughtful, touches throughout the garden.  There were several different areas that had chairs, benches, and rocking animals.  The animals looked very sturdy, so I decided to test them out.  Yes, I rocked on them and yes, it was awesome.  Whoever built the rocking animals did an awesome job!  I don’t know if they were only put there for the children, or if the intent was to allow the adults to become kids for a few minutes, regardless, it was probably one of my favorite parts of the garden experience.

One of the other touches that I thought was extremely poignant was the carved chair and the memorial bench.  Sitting on the large veranda, overlooking the Narragansett River, there is a memorial bench dedicated to George and Mary Mendonca.  I imagine that they enjoyed sitting out on the veranda enjoying the view.  The carved chair was not something that I had ever seen before, so I decided to sit and enjoy the day… and the view.

It is very easy to see why Green Animals has such an allure for families with kids.  Where else can you see huge animals in various shapes and forms?  In the same token, it is easy to see why adults love it as well.  Green Animals Topiary Garden ignites all of the child-like wonder in your heart.  It is like walking through a scene from Alice in Wonderland.  There are huge animals; flowers of almost every genus (it seems); rocking horses that you can play on; beautiful passageways covered with flowers and greenery; and chair carved out of a tree trunk overlooking the river!  I really don’t know what more you could ask for.  I am looking forward to visiting again later this year, and actually taking the Brayton House tour.  Hopefully the same nice lady is there and I can catch her name.

As always, thank you so much for following along on my adventures.  If you would like to check out the video please be sure to leave a thumbs up if you enjoy it.  If you aren’t already following me on YouTube, please be sure to get over there and follow so that you can see the latest videos!  I absolutely love reading your comments here, and on Facebook, and Instagram, so please keep it up!