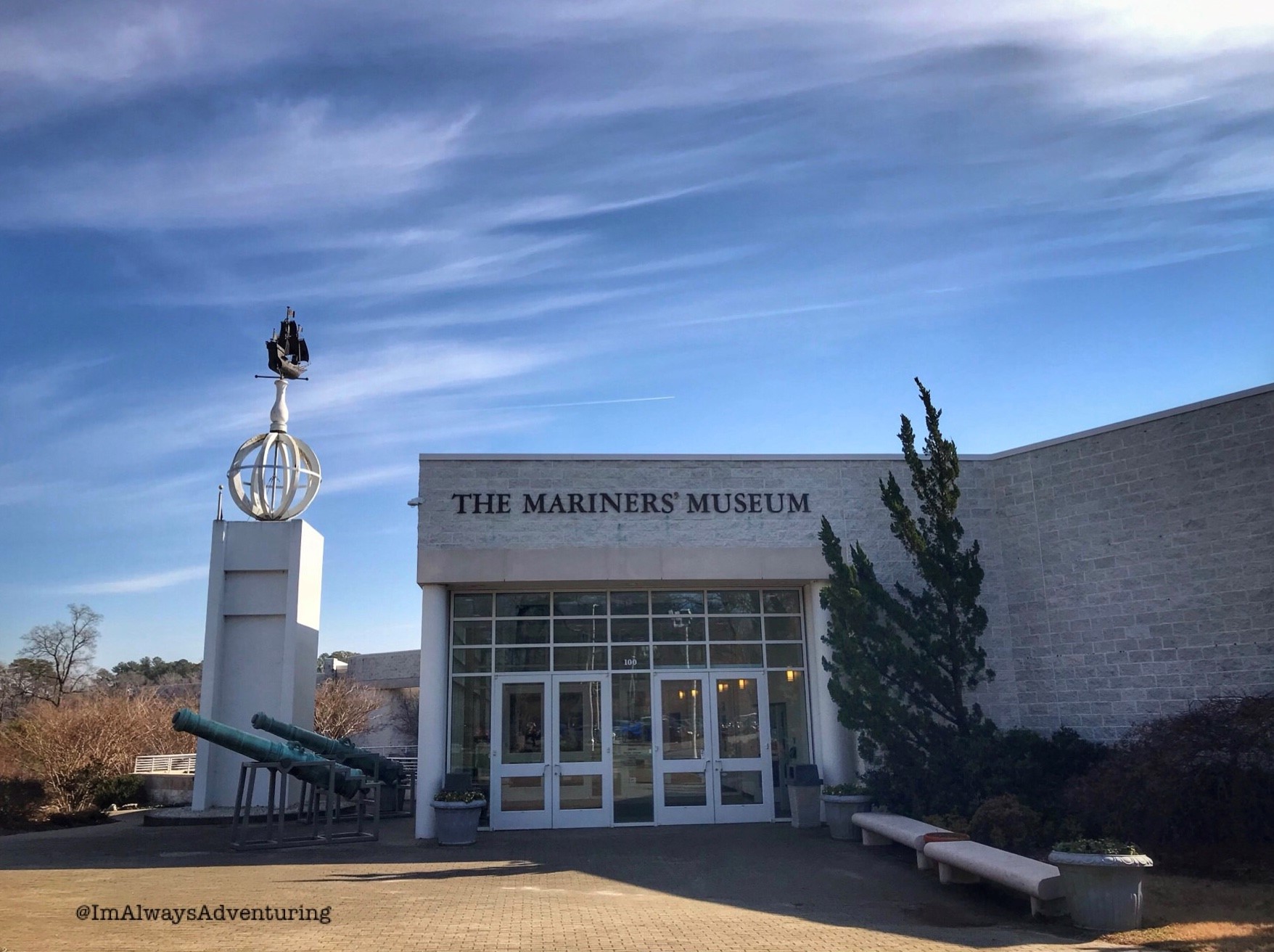 This past weekend I was invited out to be a guest instructor for a dance event in Suffolk, Virginia.  Since it is a bit of a drive for me, I decided that I would make a weekend of it in the area.  After doing some research, I decided to visit the Mariners’ Museum in Newport News.  As a former Active Duty Marine, I am a huge history lover, especially military history, so I was thrilled to explore the museum.

First of all, let me start off by saying WOW! The Museum sits in the middle of a beautiful park surrounded by trees.  You would never know that there was a bustling city right on the other side of the treeline. Unfortunately I didn’t have time to explore the park.  I have already added another trip to my list! Most of the museums that I have visited require some sort of entrance fee, it’s typically between 10-20 dollars.  Reading through what the museum had to offer, I was definitely expecting to pay close to 20 dollars.  Much to my surprise, the fee was only ONE DOLLAR! I couldn’t believe it!

The thing that drew me to the museum was that there are actual artifacts from the USS Monitor. It’s practically impossible to talk about the Monitor without getting into some of the history as well.  The USS Monitor changed Naval Warfare; the Monitor was the first Union ironclad ship.  The Monitor was pivotal in the Battle of Hampton Roads during the Civil War, where she was locked in battle with the CSS Virginia.  The CSS Virginia was poised to destroy several Union ships until the Monitor arrived.  Needless to say, after four hours the battle ended in a stalemate.

Not only was the Monitor the first ironclad, but it was also the first ship to have a fully rotating gun turret.  The turret was able to move, unlike even the CSS Virginia.  It was not without it’s flaws however, the ring that the turret rested on would leak heavily, as well as several other issues.  Regardless of the issues that it had, the Monitor marked the beginning of a new era of Naval warfare.  There is so much more information about the Monitor, it is absolutely impossible to capture it all in this post.

The Loss of the Monitor

The lantern was used to signal the USS Rhode Island as she was foundering, and it is reported that the lantern was the last thing from the Monitor that was seen before it slipped beneath the waves.  It is poetic that it was the last item seen and the first item recovered.

Due to the overwhelming amount of artifacts that were able to be saved from the wreckage of the USS Monitor, the National Oceanic and Atmospheric Administration selected the Mariners’ Museum to house them all.

Not only are there pieces on display throughout the museum, but they also have the conservation area open so that you can actually see what goes into protecting these amazing artifacts.  I was totally geeking out peering through the glass.  I’ll be honest, when I looked into the first tank, I had ZERO idea what I was looking at.  It wasn’t until I looked at the graphics next to the glass that I realized what it was and I was completely blown away!  I had no idea how large the turret from the Monitor actually was, so I thought the metal ring was some outer support structure within the tank.  Unfortunately the closest you can get is on a platform overlooking the tanks, but that alone was absolutely amazing.  To know that you are looking at an actual piece of history is mind-blowing.

Next to the turret, there are additional tanks that have both Dahlgren guns, and their carriages, in individual conservation tanks.  I was hoping that I would be able to see some of the scientists at work, but that was wishful thinking.  A sad part of the history of the turret and gun recovery was that there were 2 skeletons recovered within the turret.  To date they have not been positively identified.  There is an exhibit that explains how they were found and even has some of the artifacts that were recovered with the skeletons.

More Than Just the Monitor

I know that I have blabbered on about all of the Monitor artifacts, and believe me, there are sooooo many more things to talk about, but the Mariners’ Museum has quite an extensive collection of other nautical treasures.  Among the treasures are several ship figureheads.  The photos don’t really do them justice.  The craftsmanship is amazing.  The Eagle Figurehead (pictured above) is HUGE! It’s easy to picture these beautiful pieces of art at the front of a sailing ship. The Museum also has an exhibit for the CSS Virginia, a full-scale replica of the USS Monitor, a wing dedicated to beautiful model ships, an exhibit of small ships, and a wing dedicated to the America’s Cup.  I was completely exhausted by the time I got to the model ships, so I did not even get a chance to explore all the way through.

This article does not even SCRATCH the surface of everything at the museum!  There is simply not enough time to document every aspect of this amazing museum in one post.  I could easily create several more articles on the USS Monitor alone!  If you would like to see more photos that I took of the museum, be sure to take a look at my Instagram ImAlwaysAdventuring . If you are thinking of visiting the Mariners’ Museum, I HIGHLY recommend it.  Their website is also a treasure trove full of information: www.marinersmuseum.org

As always, thank you so much for following along with my crazy adventures! I look forward to reading your comments and your feedback.