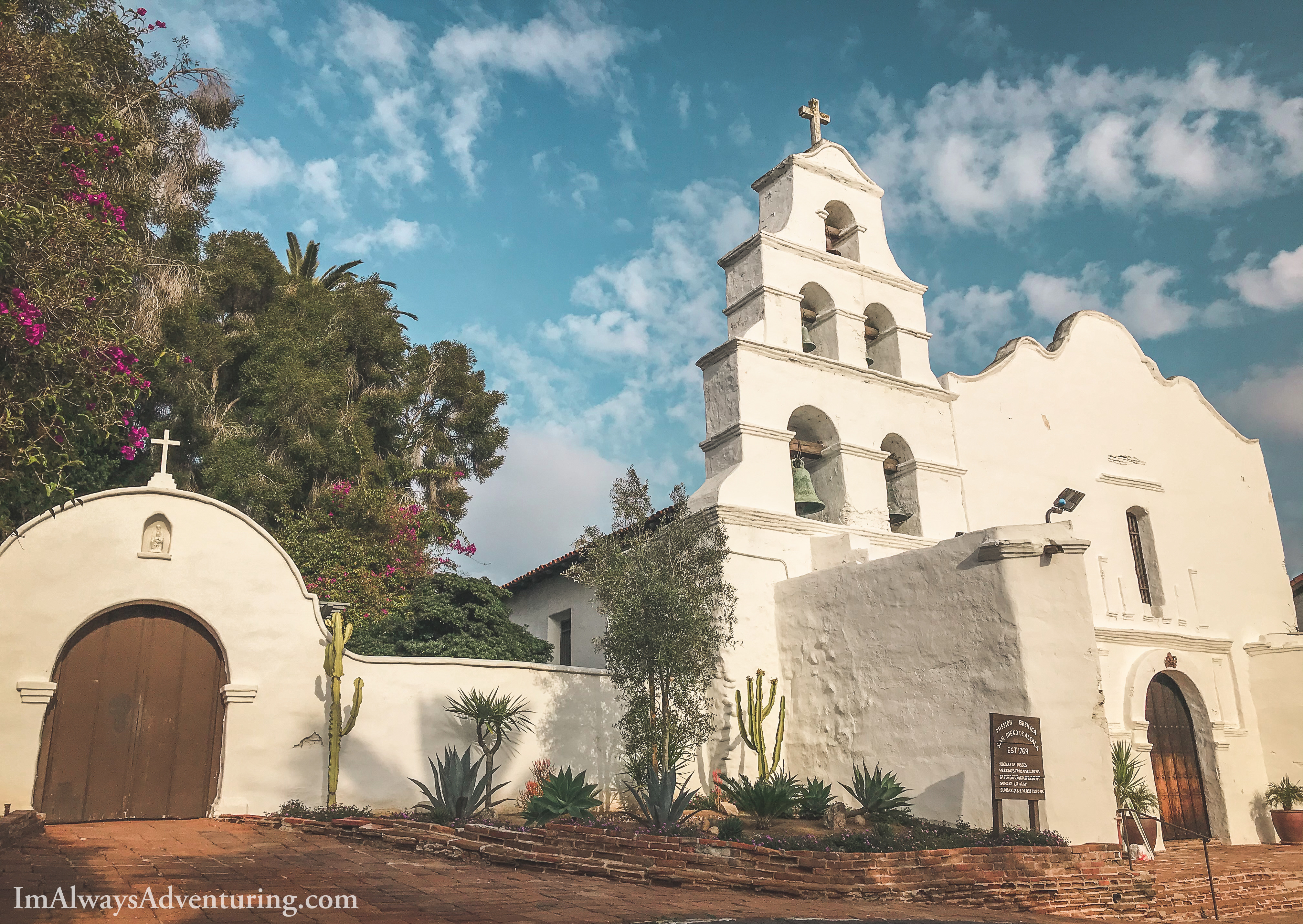 Mission San Diego de Alcala stands on one of the oldest sites of Spanish occupation in California.  During the majority of the Spanish occupation of Mexico (1521-1821), there wasn’t much effort made by the Spanish crown to journey into what is now California.  It wasn’t until 1741, nearly 220 years into Spain’s occupation, that the Russian Bering expeditions to explore the west coast, spurred Spain into motion. Spain may have never journeyed north had it not been for the sake of greed and competition.

Expedition to Save Souls

In 1769, an expedition of five different groups, three by sea and two by land, left from New Spain (Mexico) to journey to Alta California.  Once the groups had reached what is now San Diego, Father Junipero Serra established the first mission church on a hill overlooking the San Diego Bay.  The mission would eventually be moved five years later, several miles to the east in order to be closer to a good water source and to be closer to the native Kumeyaay population that the Friars were hoping to convert to Catholicism.

A Mission and a Martyr

A wooden church was erected on the current site of the mission, as well as a few outbuildings.  In 1775, less than a year after moving to the current site, in an uprising by the local natives, the church was pillaged and burned to the ground.  Father Luis Jayme and several others were murdered in the attack.  His remains are interred beneath the altar of the current church.  At the end of the portico, a white cross stands near the site where he was believed to be murdered.

In 1776, Father Serra returned to the site of the mission to personally oversee the rebuilding process.  The second church built on the site was constructed from adobe, with a thatched roof.  In 1780, the church was expanded yet again, and a sacristy was added.  The new mission had an outer perimeter wall, to deter attacks; and the church and outer buildings were constructed in a quadrangle around the courtyard.  Mission San Diego would remain the same until 1808, when a fourth, larger church was constructed. Construction was completed by 1813 with buttress wings added to stabilize the façade.

After Mexico gained its independence from Spain in 1821, there was little need for the missions in California. Mission San Diego was given to Santiago Argullo in 1834 as a reward for services rendered to the Mexican government.  All of the California missions were secularized between the years of 1834-1836; and although the property and provisions were supposed to go to the neophytes, a few prominent Californio families ended up with the bulk of it.

With the Franciscan Priests gone, Mission San Diego would deteriorate over the years.  It wasn’t until California was annexed by the United States in 1848 that the mission grounds were used again.  The United States military occupied the grounds from 1850-1857 and the soldiers made some improvements, if only to keep the buildings habitable.

In 1862, the missions and the lands were given back to the church by order of President Abraham Lincoln.  It wasn’t until the 1880’s that restoration slowly began.  The current church was erected in 1930 and it is a replication of the church constructed in 1813.

Mission San Diego de Alcala is a functioning Catholic parish, but it is also open for tours.  The grounds have been beautifully maintained and there are quite a few points of interest to be on the lookout for.  The admission fee is nominal and it goes towards the upkeep of the mission and the grounds.  Be sure to check the website for admission cost and any tours that might be happening.

The garden courtyard is a beautifully serene area that has many different areas for exploring.  There are statues dedicated to Father Junipero Serra and Saint Francis of Assisi, as well as several other statues.

The gardens were originally the site of the cemetery, where mass graves were located.  The only remnants of the cemetery are a few brick and mortar crosses that are sprinkled throughout the flowers and foliage.

Down a corridor from the gardens is a smaller area with Christ on a crucifix, a colorful art piece of the stations of the cross, and a beautiful pieta statue set amongst large cactus and other foliage.

Although many of the mission’s relics have been lost to time, there are still quite a few historical documents and replicas to see in the small museum.  From what I understand, there are quite a few more artifacts at the Father Serra museum in Presidio park, which sits on the site of the original mission.  Due to the current COVID restrictions, I haven’t been able to visit the museum, but hopefully I will be able to in the near future.

Digging Up the Past

Along the southern edge of the courtyard, there is an inactive archaeology site.  The remnants of structures have been unearthed, most likely quarters for the soldiers or gathering areas for the priests.  Although the site is no longer an active dig site, it is still pretty neat to see the outlines in the dirt.

One of the other points of interest in the courtyard is a small exhibition of Kumeyaay life.  A local Kumeyaay descendant recreated an Ewaa, the living area that could house up to four members.  The Kumeyaay were nomadic people, so their living structures were not meant to be permanent structures.

One of the oldest parts of the mission complex is the Casa de Los Padres.  There is artwork on the walls that depict scenes from the early times of the mission, as well as mission life throughout the years.  There is also a display of friar robes and other items of religious life.  The room is believed to be where Father Serra would have stayed when he visited the mission.

The current church is the fifth church to stand in that location.  Great effort was taken in the 1930’s to recreate the 4th version of the church.  It is currently an active parish, but with current restrictions, mass is offered outside in the courtyard.

There is so much more to discover and see at the mission.  This article barely touches on the beauty of the grounds and the amount of history to see.  I highly encourage you to go and experience it for yourself.