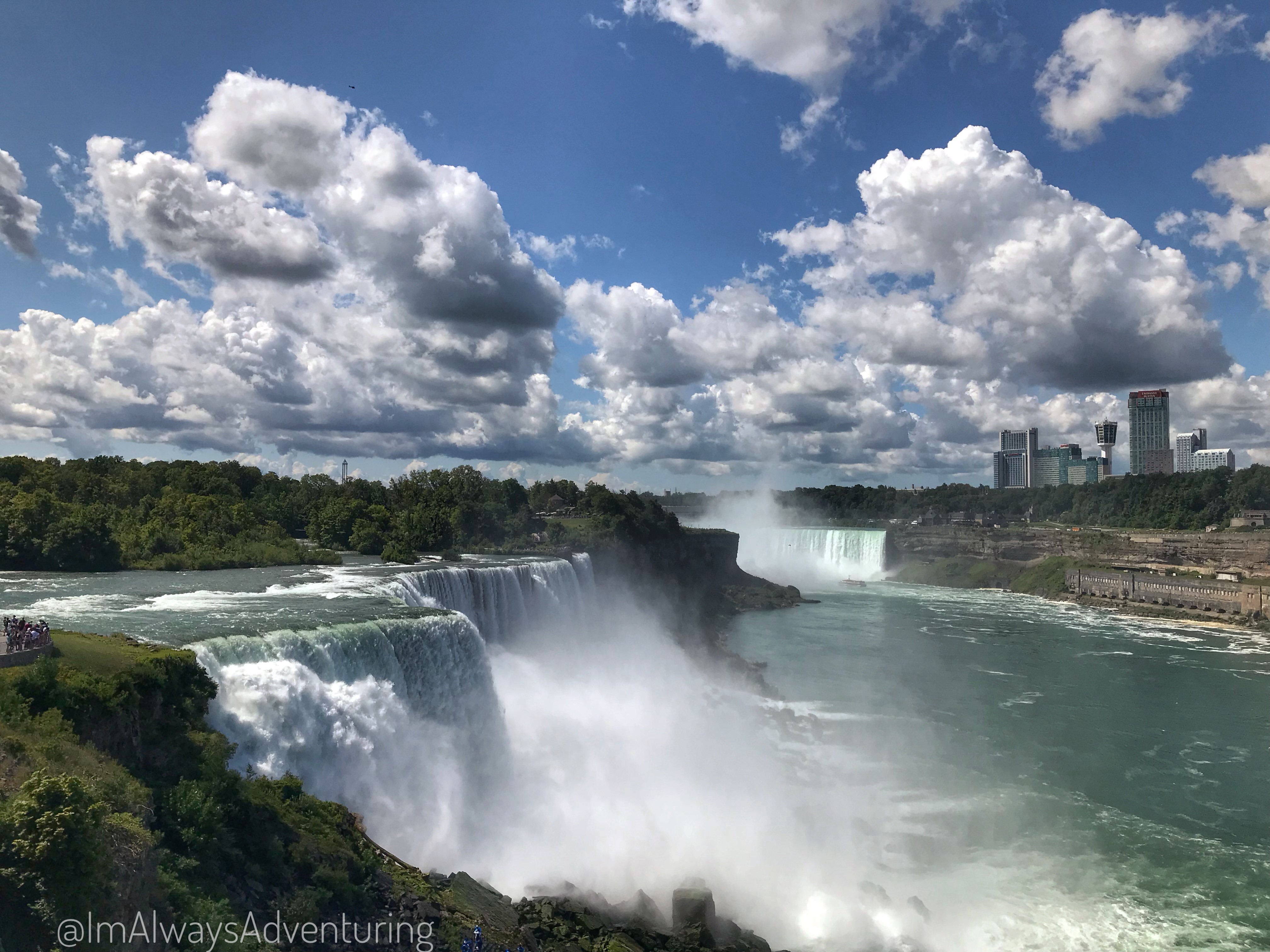 Niagara Falls….. Those 2 words instantly evoke thoughts of majestic and powerful waterfalls.  The Falls have long been a popular destination for Newlyweds and tourists alike, and for good reason.  Nothing can prepare you for how breathtaking they are in person, especially if you take one of the boat rides to see the Falls up close.  But did you know that there are other things in the area that are pretty amazing too?  We are going to take a look at a few of those things later in this article, but first, let’s talk a little bit about those gorgeous Falls.

Pay Attention to the Signs!

The Falls, which are actually comprised of 3 separate waterfalls: the American, the Bridal, and the Horseshoe Falls are everything that you could ever imagine them to be.  On our recent trip we got a very up-close view of all 3 Falls on the Maid of the Mist.  Before you board the boat you are given a poncho to wear over your clothes.  That should be indicator #1 that you are going to get wet; much like the “Splash Zone” at Sea World.   Indicator #2 was that 90% of the people getting on the ship had sandals or flip-flops on.  I was wearing Converse….. I was not prepared.  And that …. is a serious understatement.

The boat takes you past the American and Bridal Falls, and depending on the wind, you will definitely get a little bit of water spray.  The Horseshoe Falls, the largest of the 3 Falls, looms ahead as the boat slowly makes its way through the water.  So, remember when I said that I wasn’t prepared? Yeah…. Let’s discuss that….. As we got closer to the Horseshoe Falls, the boat started to slow down; and the closer we got, the windier it became, and the more powerful the water spray.

Was It Worth It? YES!

When all was said and done, my shoes, socks, and feet were completely soaked.  I could barely see through all of the water on my glasses; I liken it to driving in the rain with no windshield wipers; however, it was a blast and definitely an experience that I will never forget. After leaving the ship you have the option to hang onto your rain poncho, or disposing of it in the receptacle…. Let’s just say that I didn’t make the right choice.

Thinking that I was safe from the spray, since the spray from the American and Bridal Falls wasn’t that severe, I deposited my poncho and decided to get a closer look at the Falls along the walkway.  About 5 minutes later I regretted that decision.  The wind picked up pretty good and brought alllll of the water with it.  I went from having soaked shoes to having soaked everything.  But honestly, like I said a little bit ago, it was part of the experience; and despite being completely soaked, I had the best time.

What Else Is There To Do?

Obviously, the Falls are absolutely amazing, and I highly encourage everyone to visit at least once in their lifetime.  But did you know that the area offers so many other things to do as well?  Niagara Falls State Park is only one of many reasons to visit the area.  Let’s take a look at 4 other places that you HAVE to see.

If you are a nature lover, a photographer, an adventurer, a hiker, a breathing human, or any combination of those things; you are going to love Whirlpool State Park.  There are 2 levels, depending on how adventurous you want to be, that you can enjoy.  The street level has amazing views of the Niagara River and the Whirlpool.  The trail leads follows along the river and there are picnic areas near the welcome center.

If you are feeling extra adventurous, or you would like a decent hike, there is a level that runs alongside the river. You can access the lower level via a long staircase from the upper path walking trail.  The paths form a loop, connecting with the trail at the Devil’s Hole State Park.  I took an extended amount of time walking along the Niagara River because the views are amazing.

If hiking and nature aren’t really your thing, you can venture over to the Third Street Art Alley. The Third Street Alley is located just a few minutes away from Niagara Falls State Park, in a cute area of Niagara Falls, NY, with shops and eateries.  The alley itself isn’t exceptionally long, but it is very colorful and easily accessible.  If you are an art lover, you can easily spend an hour or more in the alley looking at the various murals. There are 19 different murals that have themes ranging from multi-colored and fun to beautiful and thought-provoking.  As the elements decay the murals, they are repaired and/or replaced.  There’s a good chance if you visit more than once, you will see something different.

Keeping with the art-loving theme, the Prophet Isaiah’s Second Coming House is worth a stop.  As the story goes, Isaiah Robertson, was working on a nearby church when his hands and tools started creating shapes and carvings.  Isaiah claims that the tools were moving under God’s power.  God then spoke to him and told him that he needed to prepare his house for the second coming.  His house was to become eye-catching in order to draw people to it so that they could be saved.  Whether or not you are a believer, one thing is for certain, the artistry of the house surpasses religion.

There isn’t much to this, besides appreciating a man’s devotion to his beliefs and his craft.  The house isn’t open for entry, only the exterior is available to the public.  But this colorful house makes for a very interesting stop and gives you an interesting story to tell.

If you are a history lover, or if you have ever wanted to walk the halls of a “French Castle”, then you need to take a visit to Fort Niagara.  Located a few miles from the Falls, Fort Niagara is the site of extensive history that spans the Native Americans, French, British, and U.S. government.

The earliest structure was built in 1678, but it did not last. A new fort was built on the same site in 1687, but due to the harsh winter, and the disease that followed, the site was abandoned. It wasn’t until the 1720’s, that Louis Thomas Chabert de Joncaire was granted permission by several Chiefs of the Senecas to build a French trading post, called the House of Peace.  The name that we know it by today, the French Castle, wasn’t used until the 19th century.

Colonial Interests and a New Nation

The fort was expanded to its present size in 1755 due to increased tensions between French and British colonial interests.
In July 1759, the fort fell to the British during the 19 day siege of the Battle of Fort Niagara.  The British occupied the fort even after it was ceded to the United States after the Treaty of Paris ended the American War for independence in 1783.  It wasn’t until the signing of the Jay Treaty in 1796, did the United States occupy the fort.  But on the night of December 19, 1813, British forces again captured the fort and held it for the duration of the war of 1812. The British relinquished it under the terms of the Treaty of Ghent, and the U.S. has retained control ever since.

The fort was used to train troops for the Spanish-American War and World War 1. During World War 2 it was used an an induction center, and later a POW camp. During the Korean War, the fort was used as a headquarters for anti-aircraft artillery.
The U.S. Army officially deactivated Fort Niagara in 1963, but there is still a military presence on the site. The U.S. Coast Guard continues to operate at the Bottoms, making Fort Niagara one of the longest continuously run military bases in the United States.

Fort Niagara sits within a State Park, which also has walking paths, parks, a small lighthouse, and of course, the fort.  The fort itself will take you some time to explore, so you might want to give yourself a few hours.  Not only are the buildings interesting, there are several living historians that walk around in period costume.  There are historical demonstrations throughout the day that vary from music to troop movements.  The fort is easily in my top 5 places that I would love to visit again, simply due to the amount of history and the amazing views.  I included a short video at the end of the article so you can get a snippet of what I mean.

I took so many photos that I wasn’t able to include in this article.  If you want to see more photos, follow me on Instagram and Facebook.

If you’d like to check out a video view of some of these amazing places, be sure to check out the video and don’t forget to subscribe to the channel!

As always, thank you for following along on my crazy Adventures.  I welcome your comments and your feedback.